Enquire or Book a Demo

The 19th century Cornhill Castle near Edinburgh was first established as a hotel and wedding venue in 1998. 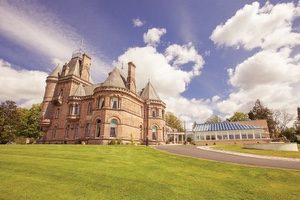 In 2006, the castle was taken over by Manorview Hotels & Leisure Group. Shortly after the acquisition, Manorview decided to do an audio technology update in the ballroom (the hotel’s main entertainment space) as part of a general upgrade. The contract for this went to SSE Audio Group.

An audio system was required that would make the lowest possible visual impact in the historic room. In addition to enabling playback of low level background music, the system would also need the capacity to guarantee highest levels of speech intelligibility and the best possible sound reproduction for live music performances.

The ballroom features a raised stage, flanked on each side by two vertical pillars. A RAL colour-matched Linea LX-600 was mounted between each pair of pillars. This passive two-way line source system (equipped with 6x 6.5” long excursion chassis and 4x 1” compression drivers on horn loaded Waveguide) lends itself particularly well to fixed installation in acoustically challenging environments. SSE Sales Manager Ryan Thomas explains: “The siting of the speakers has worked really well, the colour matching means they blend in with the background yet they are still in a position that works acoustically in the room.”

For extended low frequency reinforcement, Arc-Series AS-40 subwoofers were selected. The subs have been installed under the stage apron, hidden behind mesh grilles.

Halfway down the ballroom, Linea LX-60 loudspeakers were installed in recesses. These compact systems act as delay speakers.

To view a video of the Ballroom CLICK HERE