Enquire or Book a Demo 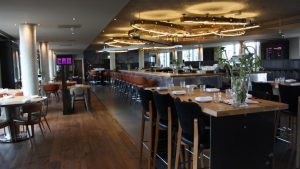 Auchinleck House, a former office block in the heart of Birmingham’s city centre, has recently become home to the newly opened Park Regis hotel. The four star hotel has 253 rooms – including an enormous Presidential Suite -, conference rooms, a spa and fitness studio, two bars and two restaurants. One of these restaurants, the Japanese “Rofuto”, occupies the whole of the 16th floor. In addition to Japanese cuisine, the flagship restaurant (which also has its own separate cocktail bar) offers guests ambient background music, along with occasional performances by DJs and other live musicians. Such diverse musical requirements demand loudspeaker systems that can be easily operated – separately from one another if required – and visually integrated without spoiling the restaurant’s interior. 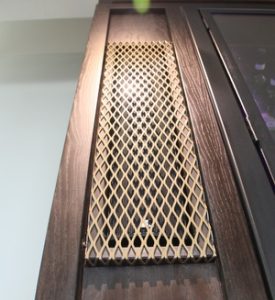 Installation of the restaurant sound system was contracted to SSE Group, who ultimately decided to go with a range of Fohhn Linea LX and Arc-Series loudspeakers. SSE designed a system that gives listeners the impression of sound coming from a single stereo source. In order to achieve this, two LX-500 high performance line source systems and twoAS-31 subwoofers have been installed either side of the bar at one end of the room. These systems have been subtly integrated into specially constructed bar furniture – with custom wooden grilles – built to SSE’s specification. 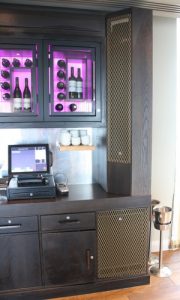 To supplement the two LX-500s, two LX-60 line source systems have also been installed on each side of the restaurant. At the back of the room, two AS-10 subwoofers provide additional low frequency coverage. These loudspeakers have also been built into specially constructed bar furniture, such as a wine cabinet. All LX-60 and AS-10 systems have been phase- and time aligned and the whole system EQd using a Q-Sys Core so that the final result is a single stereo image throughout the room.

In the cocktail bar, which is separately located at the west end of the floor, two LX-500 loudspeakers have been pole-mounted on top of two AS-31 subwoofers, guaranteeing high quality sound.

The entire Fohhn system is powered by five D-2.1500 high performance, 2-channel DSP amplifiers, which are all controlled by the Q-Sys Core. All system control is via a Sharp touch screen with custom graphical interface.

SSE has been very satisfied with the installation, praising the loudspeakers’ performance capability and their clear sound reproduction.

Many congratulations to SSE Group and Fohhn distributor Systems Workshop on this successful project.